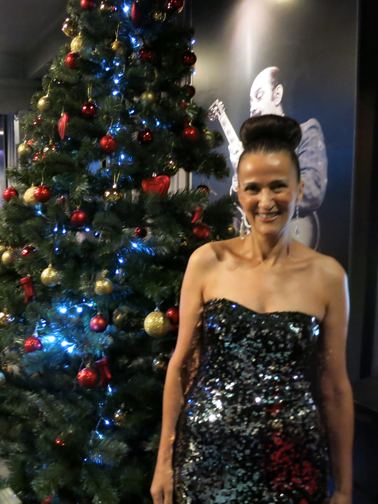 Everjazz was fantastic. Perhaps particularly because I actually made it, after a hair-raising drive from Perm, which was … fascinating – if by ‘fascinating’ you mean scary as hell and twice as fast. We started out at 9am, still dark, under a mauve sky which turned to blue to white to gray as our journey progressed into a snowstorm. “Finally!” I thought, all excited. “Real Russian snow!” But I kind of got less excited about the weather as we drove.

Hurtling along a slippery road, with snow blowing about on it like stage smoke, lined with relentless pine forests on either side – or silver birch copses hiding the odd triffid-like pine tree – every now and then we’d come upon twisted trucks stuck in a ditch, sort of like Star Wars metal beast versions of skeletons in an elephants’ graveyard, and makeshift floral memorials to recent accidents. It reminded me of Los Angeles driving, except the cars whizzing by are only on one side of you because the road to Ekaterinburg is only two lane traffic. That sounds like it would be kind of country-lane-ish, doesn’t it?

Who knew there were so many trucks? And daredevils wanting to play “Chicken” with trucks. At one point I dozed off and woke up to see – skittering towards us  out of the blizzard (at speed) – a car in OUR LANE (at speed) with a huge truck in its lane. Yes, at speed. We were all at speed!

“Is okay! Is okay!” said my driver, Tatyana, patting my arm, as I hurriedly texted Billy the details of my travel insurance policy, which includes a clause to have my body shipped home so my son never has to pick up that cost. “Russian drrrivers! Crrrazy!” she said, rolling her eyes (and her Rs). “Da!” I thought, with one eye on the speedometer (120 km per hour!) as we shot past a fresh wreath on the snowbank to our left followed by about 100 feet of charred car remains.

No danger of me falling asleep again. I don’t know why you feel safer if you keep your eyes peeled (well, obviously if you are driving, but I mean even as a passenger). But every time I looked up, it was to see cars or trucks looming out of the white coming towards us in our lane (at speed). And Tatyana patting my arm and smiling comfortingly. So when I say like driving in Los Angeles, I mean with cars hurtling towards you in your lane, as opposed to on either side of you heading in the same direction (which is quite bad enough, thanks). I guess the car in front was having trouble picking a lane because of the ice. Eek. Eyes closed! No, eyes open! No, closed!

Rather like Los Angeles, I was very relieved when we came upon a huge accident-induced traffic jam, until Tatyana (who could have given Lewis Hamilton a run for his money),  whizzed off the road to make a massive detour through several snow-submerged villages, linked by extremely narrow one-lane roads. The only signs of life were gigantic Newfoundland type dogs on long chains in people’s front drives. Oh, and one guy ahead of us who seemed to be digging himself out of a snow drift. Amazingly, about half an hour later, we came out on the main road, ahead of the traffic. If that had been me driving, we’d have come out two or three hours later in exactly the same spot we went in (that actually happened to me in Central Park once).

But it could have been worse. I could have been waiting for a bus in one of the many bus shelters we passed. What? Are people air-lifted to them? Because I didn’t see any towns or villages nearby. Or buses, come to that. Just miles (and miles) of snow and pine forests. There were also random pedestrian crossings. I’m not kidding. In the middle of nowhere! Perhaps they are thinking if you build the pedestrian crossing, the pedestrians will come.

Anyway, arriving at my lovely hotel (the same one I stayed in when I performed at the Ekaterinburg Philharmonic Hall) was … well, lovely. More than lovely – a blessed relief!

The club, Everjazz, was great! I loved the decor – even though the tables had all been moved around for the party. Huge photographs lined the walls, the menus were sort of vinyl records, and in the room where the band ate dinner, the lighting was beautiful – cymbals (pictures below). Very clever. 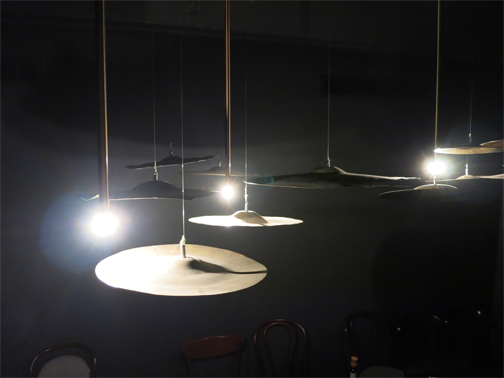 The band was wonderful again (same pianist, Anton Zoobarev, along with Portuguese drummmer, Luis Candeias, and bassist, Nelson Cascais), and the entertainment was … fantabulous.

They even had a bar tender show, with people flinging bottles around and making cocktails at the same time. And then I came home and packed – no time to sleep – so I could be ready for the 4am lobby call to come home …. for Christmas … with Billy. 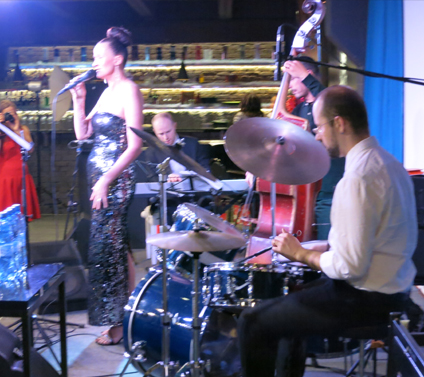 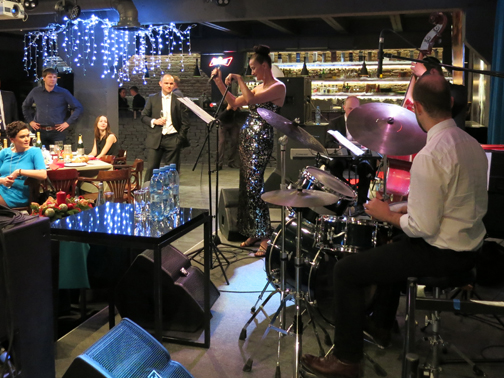 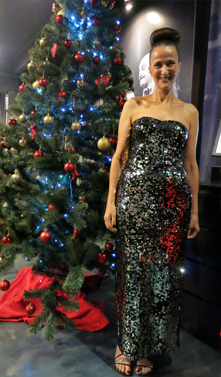 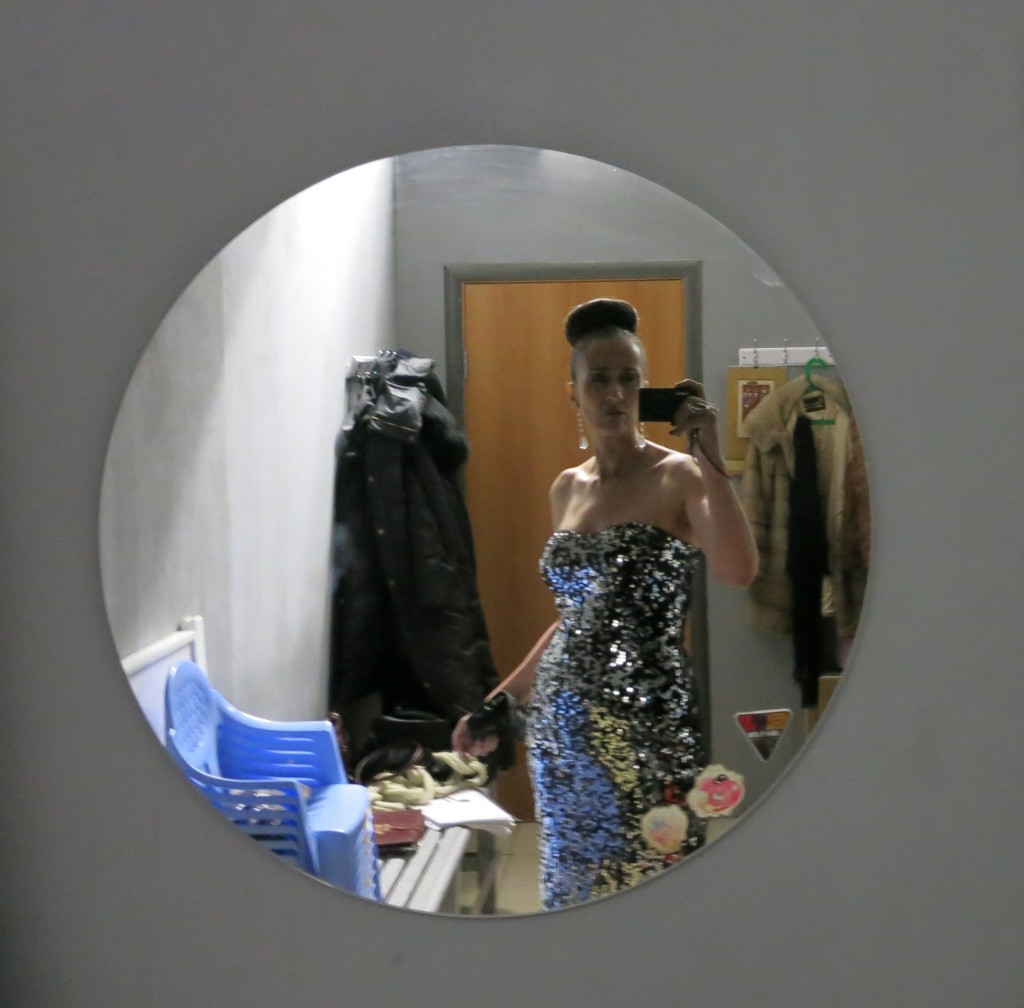 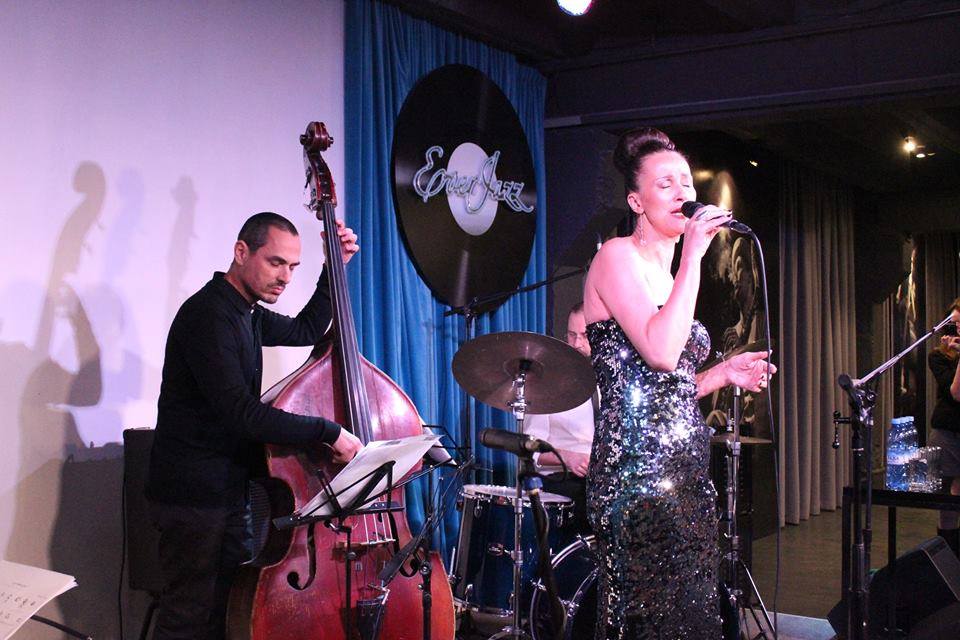