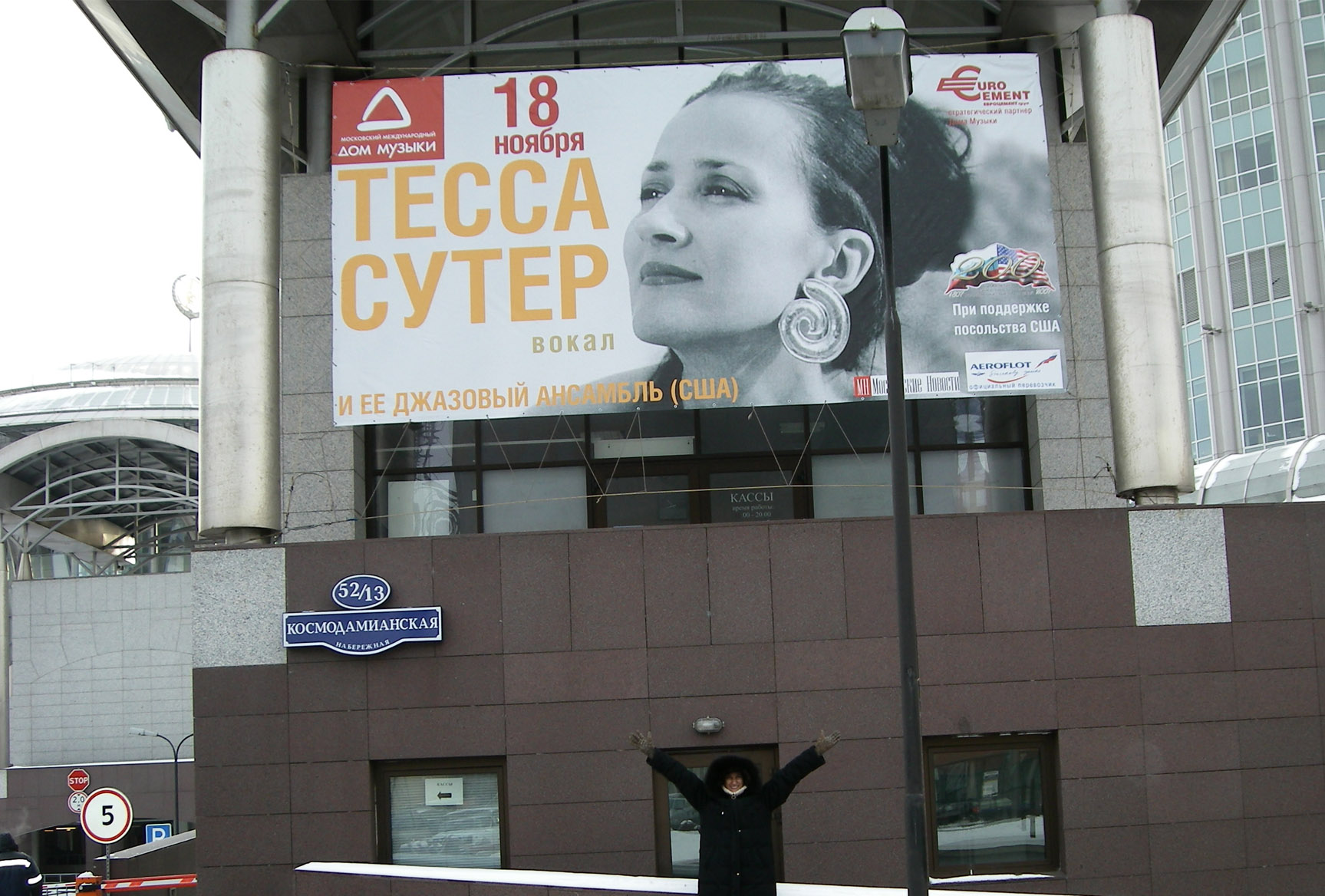 Moscow was truly amazing! Despite my fear that the 1753 seats of the absurdly gigantic venue [the Moscow International Performing Arts Center] would actually only have TWO bums on them, the gig was one of the most fun of my life! “Do you think there will be anyone there?” I said, mournfully, to the presenter’s assistant in the dressing room, where I was putting on makeup JUST IN CASE anyone had come. And she laughed and said: “Oh yes!”

When I got out there, people filled all of downstairs and some of the side seats and Francis (my percussionist, who I had shipped in from Tokyo, who has better eyesight than I do — okay, what I mean is, isn’t too vain to wearhis glasses) said that the upper deck was pack-ed (it is two syllables when he says it, cos he is Brazilian) and that there were maybe 1500 people there. The booker and all his staff were hugging me in the break, having been perhaps almost as concerned as I had been BEFORE the gig that the scruff bag (me) who’d got off Aeroflot after the 9 hour flight from hell the previous day was going to be able to pull it off.

I had been terrified that the entire thing was going to be awful. The guys (and me) were exhausted and two of them had arrived on the day. And Aeroflot is indeed the worst airline I have ever flown (the man next to me groaned for the entire flight — I mean ACTUAL groaning cos he had forgotten his jacket and it was minus 10 in the cabin… which was also ominously creaking the whole way). But although between sets and before the gig the band members were semi comatose, on stage they were like those toys you press the bottom of and they collapse and then you release it and they spring upright. They were amazing. You would never in a million years think they had just landed. On Aeroflot!

And the audience was WILD! Cheering. shouting ‘Bravo’ mid songs, clapping at the opening bars of songs they knew (including White Room). I felt like they knew me already and I knew them. Whatever people say about Russians being cold … well they must have been lying. Someone else said the audience wouldn’t speak English. Another flagrant untruth. They were even laughing at my jokes (though someone told us afterwards that the people next to her kept nudging her to translate certain songs). And at the end we got a STANDING OVATION. From 1500 people. I felt like Elton John or someone (only with my own hair). And I was surprised how comfortable I felt. Then again, the hugest ham I know (me) comfortable in front of a 1500-strong cheering crowd, who got my jokes too? Duh!

Oh, and the POSTER outside!!! Santi saw it as we were driven to the venue and said “Jesus! Isn’t that you?” I took a pic (okay, several pics — for Mum, of course!).

But I wish I had brought more CDs. By the time Irina had got out into the foyer, they had already sold out of the only 60 I had brought (imagining I would be carrying home 58, since I’d been expecting only two bums on seats). And the next day in the hotel a couple, who had been at the gig the night before, saw me in the foyer and bought two that I’d forgotten to give the presenter and the woman was kissing my photo and was nearly in tears telling me (in Russian) how much she had enjoyed the gig (an expressive people!).

Otherwise, I am having a bit of a difficult time not speaking Russian. The subways (Greco-Roman temples outside and unbelievably beautiful — like the Met or the National Gallery or something — on the inside) are swarming with non-English speaking (how dare they?) Russians who, not realizing I am, in Russia, a massive big star of Elton John proportions (only with my own hair), are impatient with my plaintive: “Er… can you point on this map here to where we actually are now?” — perhaps because they don’t quite believe I can’t see that for myself. (I am a directional dyslexic). In fact, the reason I am an expert on the subway stations here is because I have seen them all by now, having been to the end of most of the lines before realizing, oh, I must have missed my stop. And since I can’t speak Russian and say: “Don’t you realize I am Elton John?” I am being shouted at a lot by subway staff because it turns out there are distinct exits and entrances and I can’t read which is which (yikes!). And I went to bed hungry last night cos no one in the hotel speaks English and the room service menu is in Russian. Sigh.

It’s all the more difficult because the written language bears a striking resemblance to Double Dutch (which I also don’t read), with letters back to front and upside down and words with NUMBERS in them (I am not kidding!). Plus, unhelpfully, the subway stations only have the name written on the wall ONCE, so if you miss that once, you have no idea which station you are at. Okay, I admit, not that I would have known even if I could have seen it, but you might. Luckily, there have been a few kind, hand-holding types who have been able to direct me in the right place, since I clicked that the thing to do was show them a picture of where I wanted to go in my guidebook! (a picture is worth a thousand words — especially words that have upside down letters and numbers in them).

I did manage to score a night at the Ritz Carlton, on the back of writing an article for British ELLE on Moscow. I will tell you that I woke up the next day and I literally looked ten years younger. The bed was amazing. HAPPY THANKSGIVING! Or, as we say in Russia…. RRY [upside down R] 3XX FLJXCVB-ING!