Skip to content
So … Muszewell718’s question about artistic friends’ lack of reciprocity… I sense in the question that M is looking for some kind of extra meaning in that lack of reciprocity, i.e., if one doesn’t get recognition from one’s peers, one must not be “good”.
But actually, there could be any number of reasons that a person isn’t going to give you reciprocity.Let’s start with the Mum-type answer: “They’re just jealous, darling!” It could be that. Or maybe they just haven’t heard you sing/read your writing/seen your paintings. Or maybe they have heard/read/seen and it’s not their cup of tea. When I was 22 I was standing at a bar in Devon when two young women, about my age, arrived and stood a bit further along the bar, about five feet away from me. Girl Number 1. looking right at me, turned to the other and said: “Oh! Isn’t that girl beautiful!” And Girl Number 2, also looking right at me, said: “God, no! I don’t think so at ALL!” I didn’t actually care, because I wasn’t even my own cup of tea back then — stupidly, I now realize (stern Mum-voice, if there are any young women reading this!).

And some people are just plain withholding. I have no idea why! Perfectly nice people. And then there are the pushmepullyou people, who bolster you up one minute but when they think you’ve got a bit too big for your boots, make it their business to karate chop you down, for no other reason than that some people like to tear the petals off flowers. I have observed all kinds in my life. But I have learned who to go to for encouragement. And I don’t ask Girl Number 2: “How do I look?” when I am feeling insecure (or actually ever!)

Are you, M, deliberately self-sabotaging by asking for approval from the very people that you KNOW won’t give it to you? Or using other people to beat yourself up with? Or looking for permission to give yourself something you want? Or, even, using them as an excuse to just NOT DO it? If you recognize yourself in any of the above, don’t bother trying to analyze why — another wonderous procrastination tool! — Just STOP. I hope today’s excerpt helps. 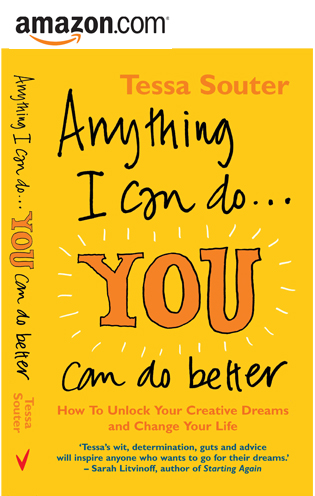 [book excerpt]Being an artist is a little like having a terminal illness. You have to guard against any kind of negativity. When you’re struggling for your very life, you don’t focus on your eighty per cent chance of not surviving. You focus on the other twenty per cent. You stay away from naysayers and doubters and the people with stories about how Uncle George had the same thing and was gone in six weeks. You surround yourself with cheerleaders who also believe you can make it. You go out of your way to be around other survivors, who inspire you to realise you can do it too. You pray. The important thing is you stay positive by any means necessary and realize (as my friend Mansur likes to say) that the only person who can stop what’s coming to you, is you.…

As a fledgling journalist I would send off my articles with no idea at all if a piece was any good. In fact, I’d invariably think it was bad. It wasn’t until the editor called and said they loved it that I would allow myself to think it had any merit, and even then I wouldn’t quite believe it until I saw it in print, unedited and exactly as I wrote it. This isn’t entirely a bad thing. As author and scriptwriter Veronica Henry [that’s Ronnie and me in the picture] puts it, “The minute you think you are good, then quit. It’s the fear that keeps you going, the gut wrenching anxiety and insecurity that drives you forward to write your best.”

When I first started composing music and lyrics I was so unsure of their worth that I used to sing them without announcing to the crowd they were mine. After enough people had come and asked me if those songs were on the CD, or they wanted to know who wrote something because they liked it so much, I felt braver about announcing they were mine at the outset. [If you are curious, Usha’s Wedding and You Don’t Have to Believe are here] I also have “music friends” who I run things by. Mark Murphy … when he really liked something I knew it must be good. And my friend, singer Mansur Scott, who hears all my arrangements and compositions over the phone, is a constant inspiration. The fact that I respect them both as honest people and great singers is huge.
[Particularly at a nascent stage, it is vital to have people around you who encourage you. If I hadn’t been pushed into it at the start by my then boyfriend I would definitely not have become a professional singer. And I am lucky now to have a man who believes in me, encourages me and whose opinion I totally respect. I am also signed to a label that believes in me. And I am surrounded by many amazing, encouraging friends, most of whom are in the arts in one way or another, so they understand].…
Think about the words ‘encourage’ and ‘discourage’ for a moment. To en-courage somebody means to inspire them with courage: to put courage inside them. To dis-courage them is to take away their courage. Deciding to devote your life to painting/photography/music/poetry/writing takes every ounce of courage you’ve got. As author Alison Owingssays: ‘You have enough trouble convincing yourself (let alone the rest of the world) you can do it, you shouldn’t have to convince your partner too!’When I was interviewed on The Russell Davies Show on the UK’s BBC Radio 2, he played the boxer’s song ‘Stand Up and Fight’ from one of my favorite movies, Carmen Jones, which I’d told him my mother and I had loved when I was a child. I thought it was a bit of a strange choice but afterwards my mother pointed out that it was perfect because the stamina required of a singer (or writer/painter/musician) is the same as that required of a fighter. ‘. . . until you hear that bell, that final bell, stand up and fight like hell.’ In the arts, where your success is dependent on other people’s tastes, you get knocked down, and have to get back up – again and again.

So when you sink back into your corner you need someone there to rub your shoulders and pour water on you; someone who, because they have made you the object of their utter undivided attention for the duration of the fight, can give you tips about your opponent’s weak points, advise you when to jab with your left or right, tell you what you’re doing right, inspire you to ‘get back in the ring’ for another round. This is not the time or place for a demoralising critique about how you’re never going to make it and you might as well give up now.