“Souter’s expressive warmth, impassioned eloquence and unfailingly beautiful timbre  are an ever-present backdrop to this singularly powerful collection . . . impossible not to be transfixed by the inventiveness and potency of Souter’s artistry.” 4 out of 4 stars, Peter Quinn, Jazzwise magazine READ

“Exploring her mixed heritage, the expat with a penchant for Wayne Shorter raises songs to the level of poetry.” Clive Davis, TOP TEN JAZZ RECORD OF THE YEAR, London Sunday Times magazine 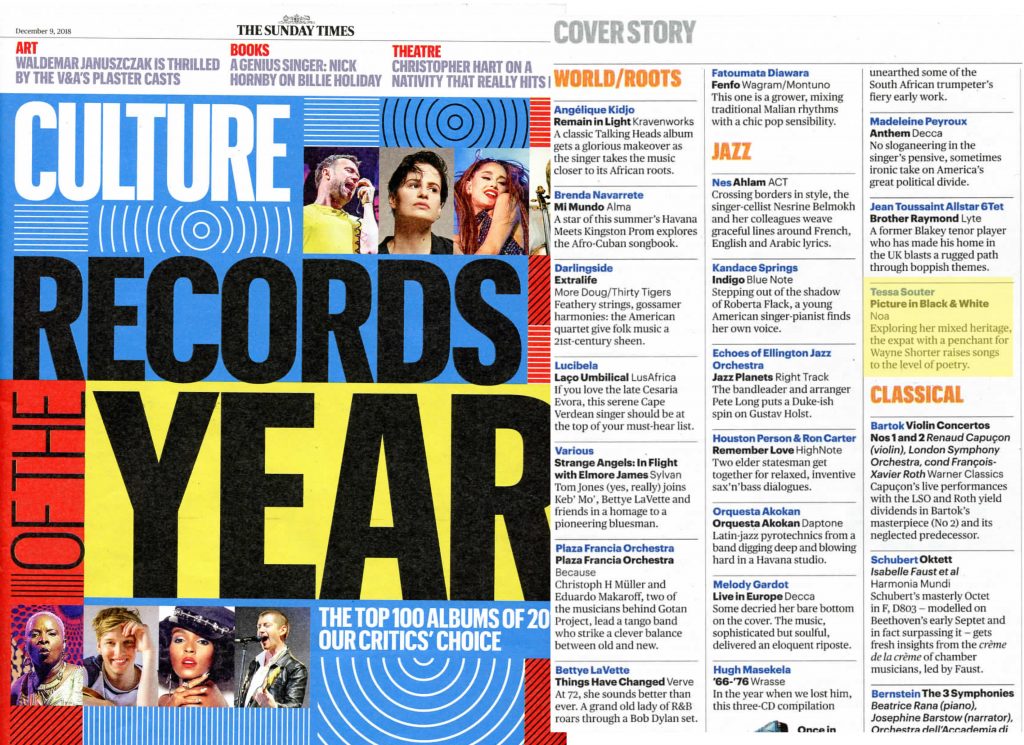 “A singer and composer blessed with wide-ranging vocals and a post-bop sensibility, through which she filters sounds from West Africa, South America, the Caribbean and Andalusian Spain.”  JAZZ ALBUM OF THE WEEK, Jane Cornwell, London Evening Standard READ

“Rarely do vocal CDs leave such a strong impact after a single hearing. This is an easy choice for the top vocal jazz CD of 2018.” Ken Dryden, New York Jazz Record READ

“Her instrument is magnificent; lustrous, precise and feather-light. Her musicianship is fierce as she digs into the expression of each word, brings ceaseless variety to soft dynamics and gives every phrase a special grace. ” Raul da Gama, JazzdaGama READ

“A remarkable journey to the interior of the human heart.” Victor L. Schermer, AllAboutJazz   READ

“She has distinguished herself a jazz pioneer exploring the nether corners of the genre, often smashing preconceptions and expectations on recordings . . .  one of the most inventive musicians singing. Bravo!” Michael C. Bailey, AllAboutJazz READ

“A  mesmerising voice . . .  impeccable timing and a unique way of articulating her way through every song … I can confirm categorically it is my favourite CD of the year by a mile..” Tony Andrews, HiFi Answers READ

“A beautiful, spiritual album. . . Picture in Black and White feels like the kind of journey saxophonist Wayne Shorter has taken us on with albums such as JuJu and The Soothsayer.” Marc Myers, JazzWax  READ 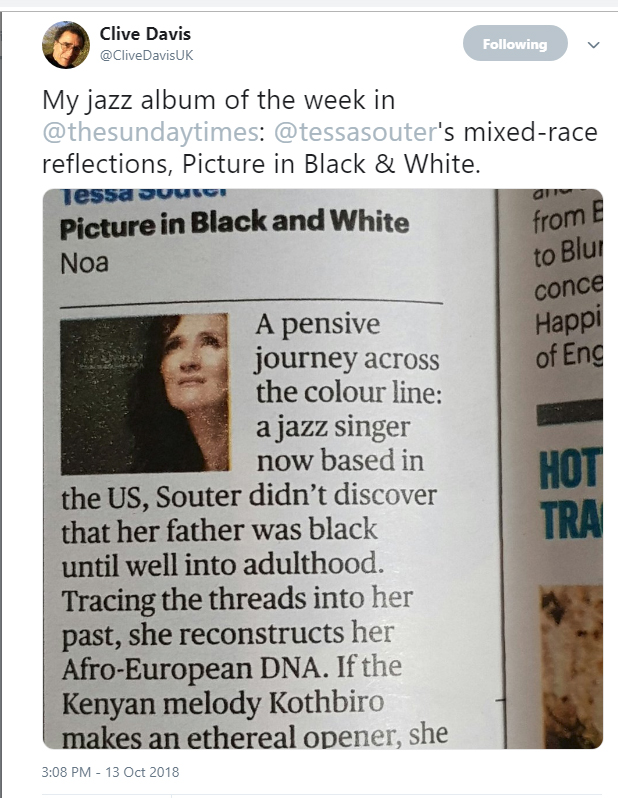 “Always a singer with a dramatist’s flair for embodying a lyric and an attraction to adventurous settings, Souter’s autobiographical new album [traces] her roots through Africa, Andalusia and Celtic Britain . . .  with an eclectic collection that ranges from Kenyan song to Ornette Coleman to a U2 hit, transforming each with an intelligent ear for sincere globalism.” Shaun Brady, Philly Jazz Guide, WXPN 88.5FM READ

“A brilliant and beautiful new album, which glows with a universal resonance. The songs are individually exquisite and collectively powerful and moving . . . Souter, with gorgeous, often breathtaking vocalizing and deeply moving songwriting, ranks in the uppermost echelon of contemporary artists.” Paul Freeman, PopCultureClassics READ

“Each song draws you into her world . . . I was utterly carried away by the Wayne Shorter song “Ana Maria” with her own lyrics.” Review is in Japanese. Koji Ishizawa, Jazz Life Magazine READ

“in some ways, a musical autobiography as much as a fascinating collection of songs.“ Richard Kamins, Step Tempest READ

“A journey that reflects the best part of America, reflecting both the roots of America and everyone that comes from the Garden of Eden.” George W. Harris, Jazz Weekly READ

This album is much more than a rich collection of unusual songs, beautifully sung. It has the narrative arc of a fine short story, told with the intelligence and heart that Tessa brings to all her singing and prose-writing. Once more she has taken the endangered art of the album and mined it to its fullest.” James Gavin, Two-time recipient of ASCAP’s Deems Taylor-Virgil Thomson Award for excellent in music journalism

“Picture in Black and White explores the tangled roots of her biracial heritage. It’s the sound of an artist doing things her own way.” John Payne, LA Weekly READ